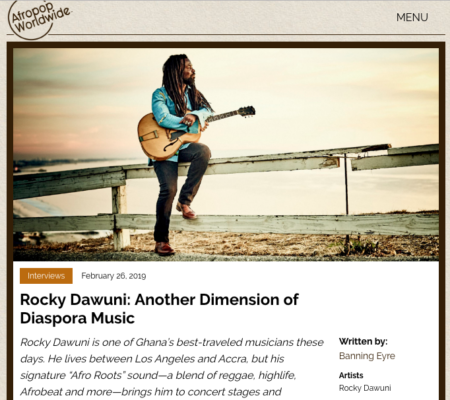 Rocky Dawuni is one of Ghana’s best-traveled musicians these days. He lives between Los Angeles and Accra, but his signature “Afro Roots” sound—a blend of reggae, highlife, Afrobeat and more—brings him to concert stages and recording studios in places like Zanzibar, Nairobi, and Harare, Zimbabwe, as well as throughout Europe and the United States. Dawuni’s 2015 album Branches of the Same Tree won a Grammy nomination, so the pressure was on to create a worthy follow-up. Now it’s here: Beats of Zion. Afropop’s Banning Eyre reached Rocky by phone in Los Angeles to talk about the album. Here’s their conversation. [Read More]