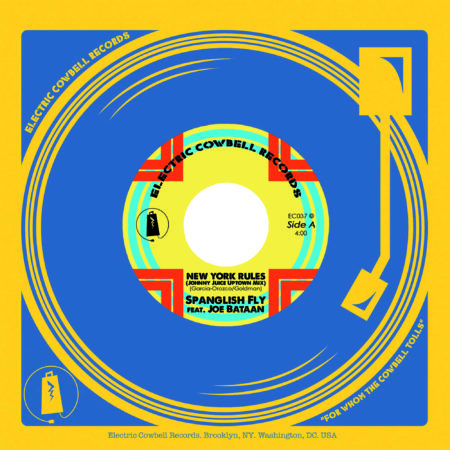 NYC’s latin Boogaloo group Spanglish Fly have a new 7″ single, “New York Rules,” which features lead vocals from latin soul legend Joe Bataan. Like his famous song “Subway Joe,” here he’s talking about riding the B Train — and getting stuck between stations — with “Bario ladies, the punks from Bay Ridge / the Bushwick babies and the Showtime Kids.” The track gets added oomph via a remix by longtime Public Enemy associate Johnny Juice. We’ve got the premiere of the lyric video which adds in some animation to subway scenes. Spanglish Fly’s Jonathan Goldman tells us about the song and video: “The song describes the New York attitude: tough, cool, and celebrating difference, as seen during–what else?–a subway stopped between stations. We were thrilled when Joe Bataan, as New York a voice as there is, agreed to sing lead, and thrilled again when we got Johnny Juice of Public Enemy to remix it, adding another piece of NYC history. Johnny took our swinging little boogaloo and turned it into a dance anthem. Diego Carranza’s video, using the album art by Victor Rendón plus live footage, captures the unfettered feeling of the remix and the New Yorkitude of it all.” Watch that below.

The “New York Rules” 45 is out Friday, July 26 via Electric Cowbell. Spanglish Fly have some shows on the horizon, including a few in and around NYC: Caracas Rockaway on July 26, Yonkers’ Hudson River Museum on August 9, and an official single release party Barbes on August 10. They’ve also got shows in Baltimore, DC, and Holyoke, MA. All dates are listed below. (READ MORE >>)