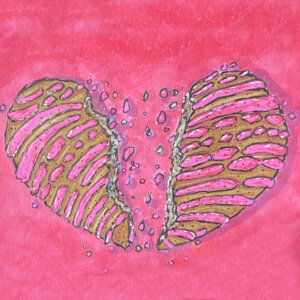 8/12/22 – Nada te pido is the second album/ep by Chicano artist Flaco el Jandro. This project is his take on the regional Mexican subgenre of Sierreño. The album takes inspiration from more traditional artists like Miguel y Miguel and Tigrillo Palma, but with elements of indie, reggae and rock. Although the album is composed of one genre, the musical stylings still vary greatly from song to song, as is to be expected from a Flaco el Jandro project. Some tracks feature banda and traditional and contemporary sierreño elements, while others experiment with the formula using jazz chords, and electric guitars as well as an organ sound reminiscent of the grupos romanticos of the 60’s and 70’s.

What makes the album unique is that it features a few renditions of reggae songs, one from Argentinian reggae legend Fidel Nadal and the other by the local Salinas band Wasted Noise.

The concept of the album is the life cycle of a romantic relationship, how it starts very exciting and innocent, but slowly can become toxic and difficult to maintain. The album cover, designed by David Castañeda, depicts a heart shaped concha being broken in two, representing how love can be bittersweet. At the end of this we are told by our narrator, Chui Ramirez, to focus on ourselves because love is not always something that we must seek, but something that finds us.