CELEBRATING 15 YEARS SINCE SELF TITLE DEBUT! 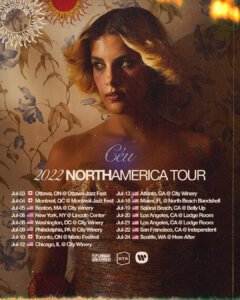 Brazilian singer, songwriter Céu is excited to return to the United States this summer for her 2022 North American Tour! Kicking off this July, it will be her first time back since 2016.  Since her last visit, the renowned artist has won 3 GRAMMYs, and released 2 stunning records, including  the newest album Um Gosto de Sol.

Um Gosto de Sol  is her first covers album that features 14 beautiful renditions of classic Brazilian songs and international classics remade and crafted by the Latin GRAMMY Award winner. It is an ode to her roots back when she was living in New York in 1998. Back then she diveded her time between a music course – the reason why she had left Brazil – and various jobs such as a cleaner, coat-check attendant, and waitress, to help pay for her rent. During that time she focused on cover songs, singing someone else’s repertoire was her first lesson – it guided her to find her own musicality – and, in the end, it was what gave her the fundamental tools to discover her place as a composer.

It has been fifteen years now since her debut self titled album was released in the United States, and after five original albums, Um Gosto de Sol is the first album in which Céu is only a performer, giving voice to a dozen songs written by her favorite musicians and songwriters. Something she always wanted to do and finally had the time as a result of the pandemic’s impact on the artist’s life.

Céu likes to say that this is indeed an album about hope. Not in an attempt to create new songs that simulated a beautiful future ahead – which at that point, in the shadow of the pandemic, would seem so unbelievable to us. But in a movement to strengthen what has – and has always been – most solid and most powerful: our history and our emotion. Even though the tough and unpredictable moments in quarantine, Um Gosto de Sol, brings a taste of sunshine and a lot of heat.

Bring this album to the stage and coming back to the US will be a homecoming for Céu. It was fifteen years ago when her debut self titled album Céu broke in the US garnering critical acclaim and catapulting her into the spotlight. Céu recalls, “I’m very happy to come back to the United States after all these years, especially to cities like Miami and Philadelphia, where I haven’t played for more than 10 years, and to return to New York, Boston, Washington, Chicago, Seattle, Solana Beach, LA and especially to San Francisco where it all started for me in the United States. Performing again in a venue I love so much, like The Independent in San Francisco, where I released my first album in 2007, will be a very special moment.”

Céu has created an acustic show that will dazzle and delight audiences as she as crafted the set based off her newest album “Um Gosto de Sol” and fan favorites! The concert will carry organic textures and be centered around the 7 string Brazilan acoustic guitar, a favorite of hers which will be played on tour by Leo Mendes who is great Brazilian instrumentalist from Bahia and son of the renowned Brazilian acoustic guitar player Roberto Mendes .  He is well adept at Brazilian rhythms and has performed with famous musicians like Caetano Veloso and Gilberto Gil. Rounding out the Céu’s trio on stage and joining Leo Mendes will be her oldest musical partner Lucas Martins on bass and Thomas Harres on drums who is very present in the new Brazilian music scene.

The tour will be organic in nature as she is backed by the band acoustically. Songs planned range from Brazilian to International classics, including hits from the last 6 albums. Céu comments, “It’s a concert that simply talks about bridges, bridges between traditional samba and modern music, between Brazil and the world, where I bring in the great artists who have influenced me musically from Bahia to international artists and who represent my great musical influences today. This concert presents myself as an artist close to her origins of traditional Brazilian music, popular and international references.” She continues, “I think this is my first show that is so close to my musical roots and where people can understand my musical journey and hear my own songs in a more acoustic but modern context.”

Check out the tour dates here and below.